We believe the future requires a transformed economy that is dynamic, just, sustainable, and resilient.

We recognize that colonialism is a powerful system interlocking with white supremacy, capitalism, misogyny, classism, and other forms of harm that systemically oppress, alienate, divide, and invisibilize racialized and Indigenous communities.

From our position within an academic institution, we acknowledge that we continue to benefit from oppressive systems. We desire to use the power we hold to challenge the status quo. We don’t have all the answers, but believe a transformed economy will be built by community-led solutions and the redistribution of leadership, which centres those who have been historically and persistently marginalized.

To get there, we start with our principles.

Centre equity in our design, strategy, and daily work.

Value knowledge, experiences, and histories in the margins of any given system.

Be open and continue learning to improve our practice.

Know future systems will draw on the new and the old.

Learn more about our principles here.

We facilitate experiential learning programs for SFU students that work within the community to address tough challenges - Change Lab and support young professionals across the nation to develop skills to lead at all levels through the RADIUS Fellowship.

We support organizations of all sizes, for-profit to not-for-profit, and across Canada to engage in internal reflection on Justice, Equity, Diversity and inclusion and assist in hosting community-led processes to address challenges.

The result is programs and processes to address deep-rooted societal challenges. 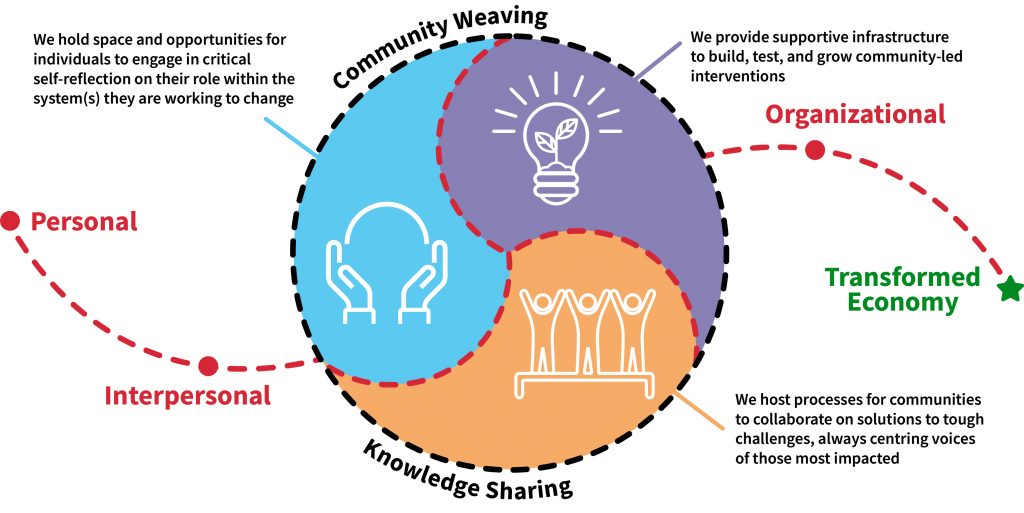 RADIUS is based out of the Charles Chang Innovation Centre, at the corner of W. Hastings & Hamilton (2nd floor, entrance on Hamilton Street). We rent some of our desks out to social innovators and mission-aligned professionals.

RADIUS is an initiative of Simon Fraser University’s Beedie School of Business. But we’re not your average business school, or university. Now committed to being Canada’s most engaged university, the book on SFU’s history is called “The Radical Campus”. RADIUS draws on the roots of an institution founded with its gaze firmly on the future, bold questions at the ready, and new ways of thinking welcome.

Our office in Vancouver is on the unceded Coast Salish Lands including the Squamish (Sḵwx̱wú7mesh Úxwumixw), Tsleil-Waututh (səl̓ilw̓ətaʔɬ) and Musqueam (xʷməθkʷəy̓əm) Nations.

Learn More about our coworking space